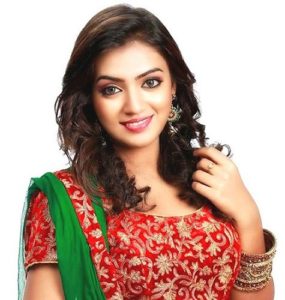 Nazriya Nazim is a star actress associated with Malayalam cinema, who appeared in a few Tamil films in lead role too. She is the most popular young actress of Malayalam cinema in the present decade, best known for Malayalam movies – Om Shanti Oshana and Bangalore Days, both released in 2014. She also received Kerala state award for best performance for Om Shanti Oshana. Neram and Raja Rani are her successful Tamil movies. Following her marriage with ‘Bangalore Days’ costar Fahadh Fasil, Nazriya took a break from acting at the peak of her acting career when she was only 19 years old. Similar to Manju Warrier, she is one of the most talented actresses of Malayalam cinema, who made her film debut at a very younger age, did a handful of memorable roles on screen, won several prestigious awards and got retired from silver screen before she reached 20.

She was born in the capital city on 20 December 1994 as the daughter of Nazimudeen and Begum Beena. She has one younger brother. She along with her family lived in gulf countries before she moved back to Thiruvananthapuram. She completed her schooling at Christ Nagar Senior Secondary School, Thiruvananthapuram. She wanted to do something related to business, and also wanted to do some course related to it. But destiny was something else.

She started her professional career as a child anchor in the year 2005 for a quiz show in 2005, and made her film debut as a child artist the following year. She played Mammootty’s daughter in Blessy’s directorial venture, Palungu which stole audience’s hearts. Since then she has been fully active in the film industry till her engagement with Fahadh Fasil in 2014, following two back-to-back Malayalam blockbusters. She married the star actor the same year and took a break from acting career. She is the daughter-in-law of veteran filmmaker Faasil, and sister-in-law of actor Farhaan Faasil, best known for playing leading role in Njan Steve Lopez.

After her film debut with Palangu in 2006, she was seen playing Sreenivasan’s daughter in 2010 film, Oru Naal Varum. Very soon she was featured in the music video – Nenjodu Cherkkaam from Yuvvh aside Nivin Pauley. Their fresh pairing received an overwhelming response from youth, and later they were paired in a series of films, and all those films turned to be huge hits. In fact she got her first hit in a lead role pairing with Nivin. Though Maad Dad was her first film in a lead role, it was the super success of Malayalam-Tamil bilingual Neram, which earned her a huge fan following crowd from Malayalam and Tamil cine goers. Following the success of music video Yuvvh, its director Alphonse Putharen experimented with the same pair for his debut flick which turned to be a huge hit in both languages.

It’s quite co-incidence that after the super success of music video Yuvvh and bilingual Neram, the duo shared screen space for the biggest two hits of their respective careers, Om Shanti Oshana and Bangalore Days, both released in 2014. While she was paired with Nivin in woman-centric movie, Om Shanti Oshana, the duo played cousins in Bangalore Days. Nasriya also tasted success with her Bangalore Days co-star Dulquer Salman for a couple of movies. They were paired for the bilingual, Vaayai Moodi Pesavum. The Tamil version was a huge hit, while Malayalam version, Samsaaram Aarogyathinu Haanikaram flopped. In 2014, they worked together in three movies of which, Salalah Mobiles flopped at box office, while Vaayai Moodi Pesavum and Bangalore Days were hits.

She is a recipient of Kerala state awards for best actress for her outstanding performance in Om Shanti Oshana. The movie also earned her several nominations for best actress at various awards. Her pairing with Nivin Pauley has been appreciated most, and they won a series of awards for Neram.

Want to be the first to know when new videos available? Subscribe to our weekly email newsletter. No spam!